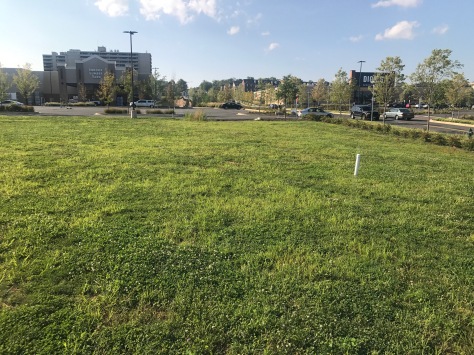 Chick-Fil-a is slated to be the latest fast-casual franchise restaurant at the Shops at Dakota Crossing in Fort Lincoln.  The site is located in the grassy lot in front of Lowes as seen in the photos above.  Early reactions on social media from Fort Lincoln residents were mixed once word of the selection was made.  Some residents welcomed the chain while others are opposed; while some are for political reasons others are still concerned about the selection of restaurants hoping for healthier selections such as Panera Bread which have declined to take up residence at the Shops according to the Developers.  The site was initially slated to be a bank with drive up tellers, but according to the developers banks weren’t looking to expand.

According to the BZA Application the Developer would like special exception relief to allow a drive-thru. 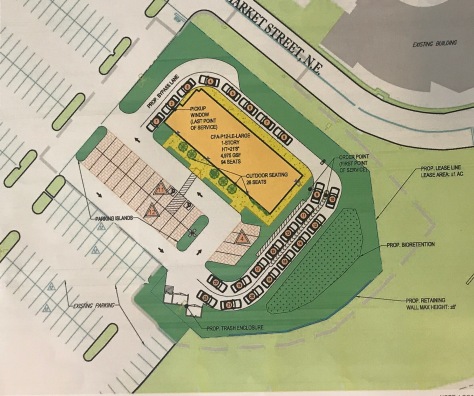 According to the application fast food establishments are  permitted as a matter-of-right and that the special exception is for the drive-thru.  Retailer aside, I’m concerned with the narrative of the application which in my opinion inaccurately details the true conditions of that location as well as the engagement and reaction with both the ANC directly and the community.  Some of the items that stick out to me are:

Aside from the 4 items above, there is already concern from residents with the flow of traffic in the shopping center. Most pedestrians proceed at the mercy of courteous drives to access the majority of the pedestrian cross walks.  The walkability of the shopping center with a high volume drive-thru will impact how people can safely access the center and the community needs to be involved in the planning process for how and what is implemented.  Some of the obvious concerns are the following:

1. Existing infrastructure leaves pedestrians at the mercy of vehicles that are coming from Rt. 50/NY Ave. which have complete right of way and no required stops.

2. Traffic flow along market street which has two pedestrian cross walks ( at this location) which has no required stops except when pedestrians are present.  (Cars decide whether not to stop at these signs.  Most times they do not.)

3. Where’s the traffic study to determine how the location of this drive-thru will contribute to back ups at the intersection of Market Street and Fort Lincoln Drive. As well as the on ramp onto the shopping center where one lane is often backed up for the Costco Gas station.

4. Trash along Fort Lincoln Drive between 33rd and 31st place as a result of cars which often park and throw trash out of the window.  (The city will not place trash cans in this location after multiple request)

5. The aesthetics of the building are counter intuitive to the work by the National Capital Planning Commission to ensure that the building is architecturally appropriate as the second building seen entering the city.  Chick-Fil-a has many concepts for their stores and for the store that serves as the gateway to the nations capital is generic and not neighborhood oriented.

Overall, while a restaurant is consistent with the property use, a high capacity drive-thru in a shopping center with minimally regulated/enforced traffic infrastructure is not. The developer needs to officially address the concerns of the community and how to accommodate the adverse impacts to the community.  The meeting for the drive-thru variance is on Thursday, September 28, 2017 at 7:00pm.  The meeting will be held at Mount Horeb Baptist Church.